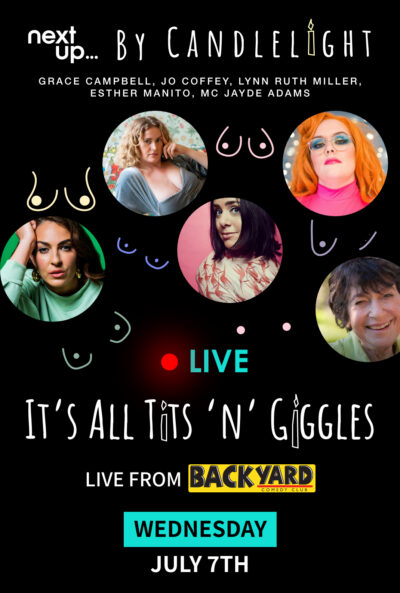 NextUp presents It’s All Tit’s N Giggles, a night to enjoy and celebrate the very best of women in comedy, by candlelight! (It’ll be right cozy)

Join us at Backyard in Bethnal Green or from your computer screens, to catch Grace Campbell, Esther Manito, Jo Coffey, Lynn Ruth Miller, with MC Jayde Adams and many more on the 7th of July!

For in person tickets:

For online only tickets:

Grace Campbell is a riotous and unfiltered comedian and writer from London. Grace’s comedy is merciless, she will make you feel less ashamed of all the bullshit you’ve ever felt embarrassed of. “Hilarious and laudably liberated” Katherine Ryan.

Jo Coffey is an actress, comedian, presenter and writer. A regular performer in comedy clubs up and down the country, she has performed two solo shows, Not 25 and Curiously Caffeinated, at the Edinburgh Fringe. Jo was also a finalist in the NATYS and Funny’s Funny competitions. Jo’s presenting credits include Big Brother’s Bit on the Side (Channel 5) and Big Brother’s Little Brother (Channel 4 & E4). She is also an experienced actress – her credits include EastEnders (BBC One), Artemis Fowl and All Is True, both directed by Sir Kenneth Branagh. Jo is currently working on a scripted comedy pilot script which is under option to Roughcut TV.

Lynn Ruth Miller is the world’s oldest working stand up comedienne; anyone older than her cannot stand up!

Lynn started comedy at 70. She made it to Las Vegas in America’s Got Talent, 2008, won People’s Choice in 2009 Branson Comedy Festival, the finals in Bill Word’s Funniest Female Contest 2009 and semi-finals in the SF International Comedy Competition, the top 100 in Britain’s Got Talent, not to mention winning both nights for the Texas Burlesque Festival without taking off anything that matters. 2013 TO&ST winner: best cabaret Edinburgh Fringe.; 2015 Liberty Award Leicester Comedy Festival; 2015 finalist: Old Comedian of 2015: London. At 87, she is still going strong. She tours the world and is a regular in Berlin, Dublin, Amsterdam, Singapore, Cambodia, Viet Nam, and Japan. Then lockdown happened so she does Zoom gigs all over the world. Nothing can stop her now but the grim reaper.

Ruby is a polite young lady from Hertfordshire. Her so-called comedy was recently featured in Time Magazine and Vogue for some reason. Here are some things people have said about her: “A unique and hilarious brand of absurdism”- – Broadway Baby, ★ ★ ★ ★ ★

Ginnia is a London-based East Asian comedienne who’s reached the semi-finals of many of the UK’s comedy competitions including SYTYF and Up the Creek’s One to Watch. She co-hosts London’s sex-positive live comedy experience Sex Standing Up, which has been recommended by the Metro and Londonist and is regularly listed as TimeOut’s top 3 things to do in London. Ginnia was recently handpicked by BBC Writersroom for a programme showcasing the UK’s East Asian comedy talent.

Emily Bampton is a bright new voice in stand-up comedy, having performed at the Leicester and Bradford Fringe Festivals. She is also a talented improviser, performing with the famous Oxford Imps. Standup + improv = yes please.

One of Glamour’s 7 Funniest Women at the Fringe 2019 and Funny Women’s 2020 ‘One to Watch’. Karen’s stand-up style is described by critics as “uncomfortably excellent’’ (Chortle) and “heartfelt comedy at its best” (Three Weeks).

For in person tickets:

For online only tickets: