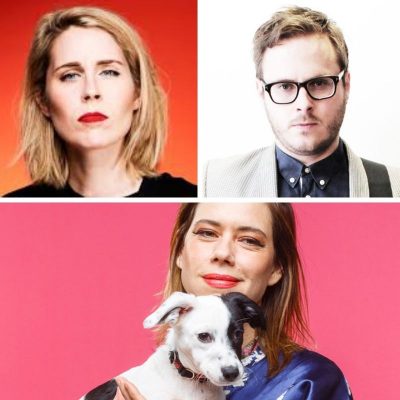 For the incredible price of just £3 and a collection bucket on the door you can see Stevie Martin, Lou Sanders and Gareth Richards perform their brand new shows before taking them to the Fringe.

Stevie Martin (one third of sketch group Massive Dad and co-host of the Nobody Panic podcast) returns after last year’s critically acclaimed Fringe run with a lovely bit of business involving sketches, talking and absolute bangers (jokes). For anyone who likes their content hot (and their bangers stone cold). As seen on Sky’s Breeders, Channel 4’s Damned and in various cafes trying to find a plug socket.

Loulie, AKA the face that launched a thousand dicks, examines conduct (in the media, baby), mental health (other people’s, I’m fine) and perverts (that one is mainly me, actually). I’ll be oversharing, wanging on about spirituality and giving everyone some much unwanted advice. As seen/heard on Taskmaster, QI, 8 Out of 10 Cats Does Countdown, Hypothetical, The Russell Howard Hour, The Unbelievable Truth, Ultimate Worrier and more.

Gareth Richards: 40 Years in the Wilderness

Join Gareth Richards, Foster’s Edinburgh Comedy Awards best newcomer nominee 2010 for his ninth stand-up comedy show, with some hilarious songs played on the Q Chord. As seen on Russell Howard’s Good News and Live at the Electric on BBC 3. As heard on BBC Radio 1, 2 and 4 and Frank Skinner’s award-winning Absolute Radio show.