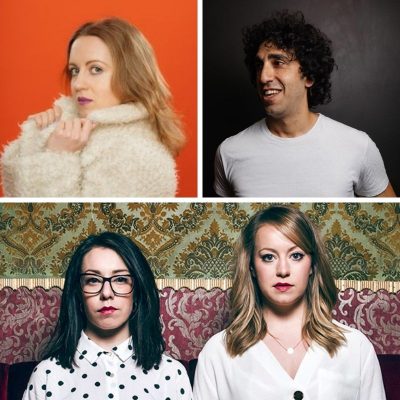 For the incredible price of just £3 and a collection bucket on the door you can see Ray Badran, Flo & Joan and Annie McGrath perform their brand new shows before taking them to the Fringe.

Australian comedian Ray Badran recently moved to the UK and is performing his debut Fringe show. A show about the big issues plaguing us all such as pockets, Subway sandwiches, fridges and more. Come and see why everybody loves Ray, man. Winner of the Best International Guest by the New Zealand Comedy Guild 2017, and as seen on Comedy Central in his series No Experience Necessary

‘His style definitely struck the right chord for the night, getting the entire crowd in hysterics’ (ArtsReview.com.au)

Flo & Joan: Before the Screaming Starts

In January, musical comedy sisters Flo & Joan watched the Bros documentary and saw a glimpse into their future; a lot of dog portraits and male pattern baldness. Anyway, following a sell-out run in 2018, they have a new hour of their dark and waggish songs to parade about the place.