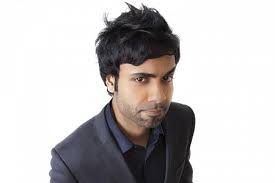 As one of the the biggest selling live comedy acts of  2015, Paul’s latest comedy DVD –  PC’s World – is riding high in the comedy charts. Having spent a year selling out many of the UK’s largest theatres, here’s a one-off opportunity to spend an evening in conversation with Paul. Amongst other topics, we’ll be discussing racism & prejudice within the comedy world.

Namedroppers is perhaps the most authentic experience happening in British comedy today.

“…. a lovely, memorable experience. Joel has a rare and natural ability to open up his guests and bring out a side of them which the public rarely sees. It’s no surprise that he has such a loyal, devoted audience at his shows, no matter who he’s interviewing.’ MATT LUCAS

“Seriously …. in 30 years of gigging that was probably the most enjoyable night I’ve spent onstage.” BOB MILLS

“Joel got stories out of me I didn’t even know I had – and they were funny too!” HARRY HILL