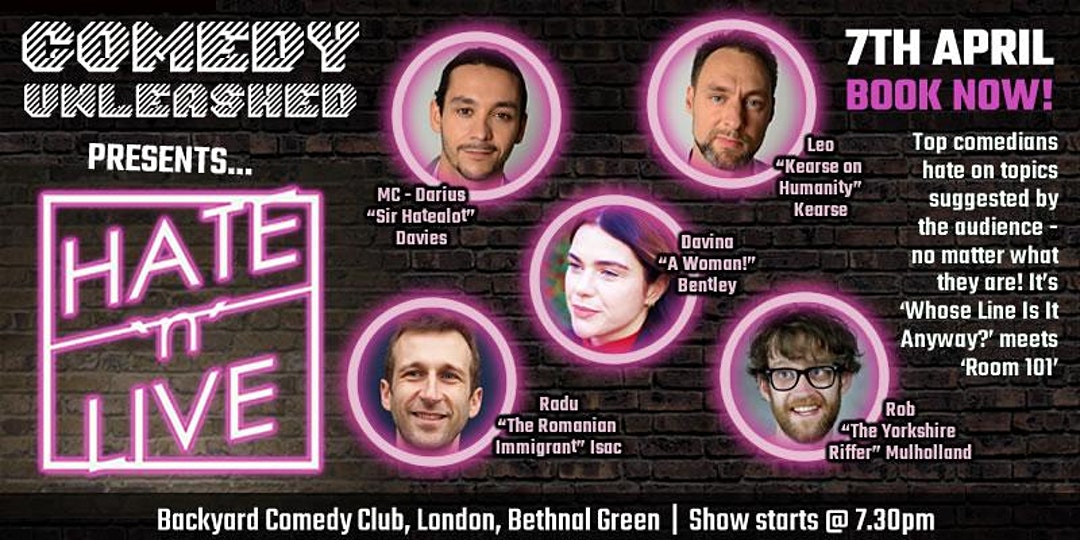 Hate ‘n’ Live is an improvised stand-up show like no other. Audience members write down topics and comedians “hate on” them – no matter what the subject! This hilarious format comes into its own when comedians squirm around contentious subjects.

Every show is unique with a changing panel of comedians and a variety of fast-paced rounds. Audience subjects range from topical to surreal, with comedians having to say why they hate “caravaners”, “the mating rituals of guinea pigs” and “people who jumped early on 9/11”.

Uncensored, provocative but always hilarious, Hate n Live often courts controversy in today’s hyper-offended culture. It is the only show where comedians have free rein to say what they want – an unsafe space in a sanitised and censorious society. A huge hit with audiences – it’s edgy, improvised and they own it!

Currently in development for TV, Hate n Live has become a cult sensation at the Edinburgh Fringe and toured internationally to the Perth and Adelaide Fringes. Raucous, unpredictable and hilarious, it’s the Motley Crue of comedy!

“A great idea for a show, brutally funny… absolutely brilliant!” – The Scotsman