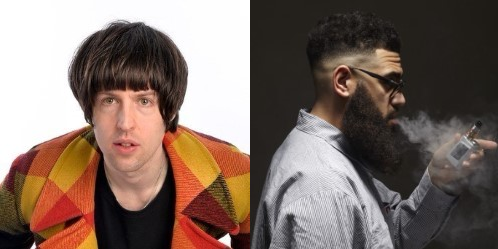 Critically acclaimed comedian and host of Viceland’s Hate Thy Neighbour, Jamali Maddix is returning to Edinburgh before heading out on his first world tour. He’ll be bringing brutally honest and unflinching material on the state of society along with personal tales from his travels around the world of hate and moral confrontation. As seen on Live at the Apollo (BBC Two), The John Bishop Show (BBC One), 8 Out of 10 Cats (More4). ‘Something to offend everyone’ **** (Sunday Times). ‘If you are easily offended stay away. If you think you’re not, prepare to be challenged’ ***** (Edinburgh Festivals Magazine).

On the back of last year’s critically acclaimed Love Machine and an appearance on Live from the BBC (BBC Worldwide), Tom Ward is going in for a closer inspection of his favourite themes: love, freedom and aloneness. Join the hip-haired one as he takes a look at the burgeoning “cutesy culture”, the myth of sunglasses, the cold slap of passport photos, the reality of sex parties, visions of an Uber vs black cab utopia, living alone and dancing with his mother. ‘A star in the making’ (Time Out). ‘A unique and genuinely exciting talent’ ***** (Herald).