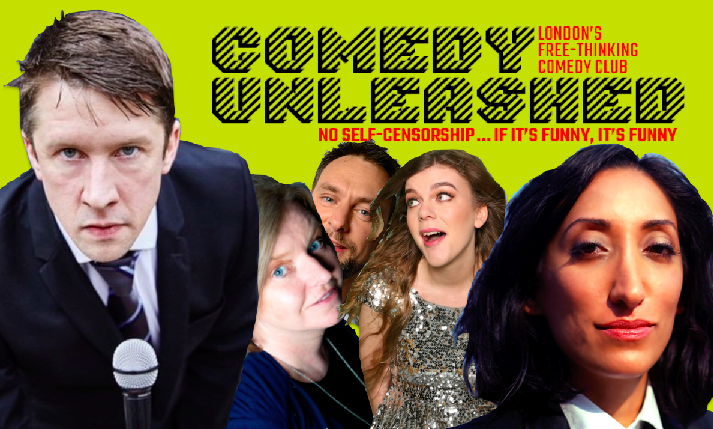 Jonathan Pie is the comedy sensation who satirises the world of politics and the media.  A frustrated news reporter known for venting his spleen in unguarded “off-camera” rants, his online videos have been viewed by millions worldwide.

As an old-school leftie, Pie’s anger is usually directed towards the Tories.  But he has also been known to question the tactics of the left, which has got him into serious trouble from time to time.

Shazia Mirza is an award winning British stand up comedian and writer.

But what do awards mean anyway? Everyone’s got an award. You get awards these days just for leaving the house and recycling your yogurt pots. Her parents just want her to get married.

∗∗∗∗ “at this moment in time – post-Brexit, post-Nice, post-Orlando – it’s on point chilling and superb” The Skinny

“A conversational style with humour so interwoven it seems effortless.” Chortle

“A performer the audience could have watched all night” The Herald

Lanky Scot Leo Kearse is part of the new wave of raw, bold, American-inspired comedians taking the big UK clubs by storm. He works for Just The Tonic, Comedy Loft, Jongleurs,Top Secret, Backyard Club, TED Entertainment and many others.

“a spiky, deliciously bawdy and remarkably assured debut hour that deserves to be one of the break-out hits of this year’s Fringe.” Telegraph

“Fast, Forthright and Filthy” The Grauniad