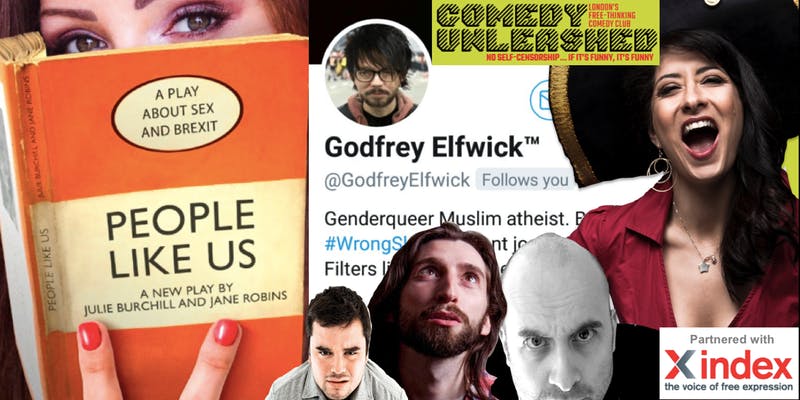 Julie Burchill and Jane Robin’s hilarious play about the chattering classes and their Brexit horror hits London theatreland in October. We will be treated to a live preview from the play.

Jay pokes fun at unthinking orthodoxies and unpicks liberal pretentions. He was a hit at a previous Comedy Unleashed gig and, in repsonse to many requests, we have given Jay a longer slot. Here’s a taster

Elfwick was a brilliant Twitter caricature of the excesses of the liberal-left. He, or rather xe, identified as a ‘genderqueer Muslim atheist’ who was ‘born white in the #WrongSkin’. For some, the image of Godfrey on the Women’s March in a full burka and pink pussy hat was a step too far. Godfrey has been banned by Twitter. This is our memorial to his life.

Dan is an overgrown kid who enjoys losing himself in surrealism. He won’t give you his life story or deliver well rehearsed observational stories. Thank god for that.

Partnered with Index on Censorship